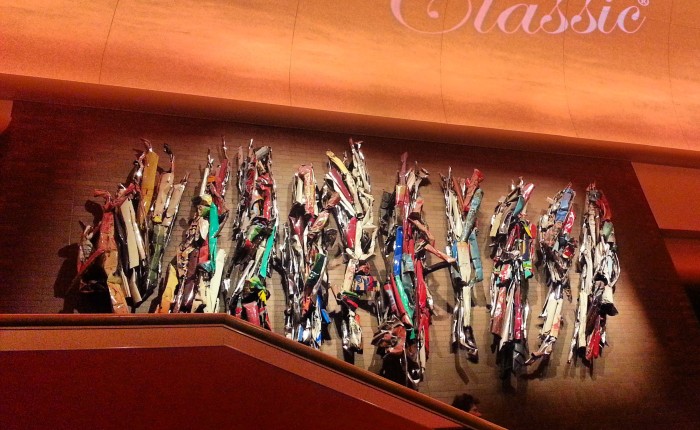 Saturday morning opened with clouds in Louisville, but that did not put a damper of any kind on the Bourbon Classic, or our trip in general. We woke up relatively early, and went to meet a gentleman from whom I purchased a bottle of Weller 12 Year (unavailable in Michigan) for later review.

I would like to say this about Kentucky – I have now met with several third-party “craigslist” style sellers to procure bottles not available, or hard to find, in Michigan – and have found there is a genuine friendliness in these exchanges that I have not found anywhere else.  Maybe it’s just better manners, but my wife and I were chatted up, about bourbon and life in general by every ‘collector’s market’ person we met.  Here in Michigan, the same transactions are tense as a TV drug deal, and all of the friendliness too.

We wondered over to a store called Vault Liquor and added a few more bottles of more accessible bourbon to our hall with the help of the friendly gentleman behind the counter of this round, strangely set-up store.

From there, it was back to the Classic, and it did not disappoint.

The Classic kicked off with a panel discussion where some of the biggest and most famous Master Distillers, as well as some younger up-and-comers, talked frankly about bourbon trends, tastes, the future of the industry, how to maintain quality but be inventive, and many other topics.  It was extremely fun, but also incredibly informative.  Some of the things I noted:

We left this fun session and went to the first of our breakout sessions, Bourbon Flavors with chef Ouita Michel of the Holly Hill Inn.

Now, I had expected this session to be more about recognizing flavors in bourbon itself, but it was more of a lesson in taste pairings between bourbon and food.  Using a variety of different tastes, and Woodford Reserve bourbon, we sampled and noted how sharing each sip with a food taste enhanced the overall experience.

Next, it was a more formal food session with Albert Schmid, National Center for Hospitality Studies, Sullivan University.  Here, Chef Schmid walked us through some do’s and don’ts of cooking with bourbon, and showed us two recipes that we then got to sample – a bourbon chicken and Woodford Pudding.

Both were delicious (we got to sample each), and when it adjourned, it was time for the Ultimate Bourbon Experience.

This is an amazing thing – there is plentiful delicious food – beef tenderloin, pork tenderloin, corn pudding, sausage stuffed mushrooms, and on and on – and you walk through the lobby and main areas with a bourbon glass, getting samples from and chatting with representatives from almost all of the major and many smaller distilleries.

For review purposes, this isn’t the best way.  But for sheer enjoyment, most definitely! We started at Angels Envy, sampling the A.E. Rye, then moved on to the Western Spirits display, makers of the Calumet Farm bourbon I’ve spoke highly of.  To be honest, the representative there was not very helpful in talking about the bourbons, and didn’t particularly seem interested in it.  Disappointing, but I had a drink of their Lexington bourbon and moved on.

Nelson’s Green Brier distillery has a great story, and it was a pleasure hearing Charlie Nelson tell it.  The Belle Meade bourbon was distinctive, and I hope to get a bottle to review here in Michigan soon.  From there we wandered longer, stopping for a bite, then a drink. Lather, rinse, repeat.

Prudence dictated we head back to our hotel at a decent enough time to take off for home bright and early (to prepare for a Super Bowl party we host), but I cannot say enough great things about this event.  It was truly a great time, and I hope to return next year.  Fantastic.