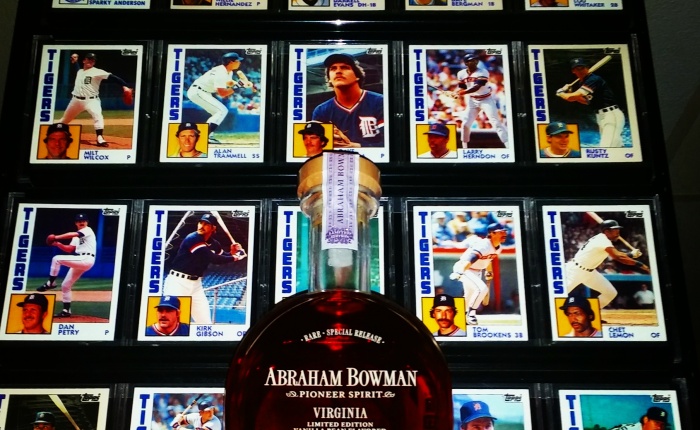 Among the many great things about travelling to Kentucky for bourbon events is the opportunity to purchase harder-to-find products that just aren’t available here in my home state of Michigan.  While the local selection has certainly improved in the last five years, it is still a drop in the bucket compared to what is available in the larger Kentucky stores, much less the more legendary stops in Bourbon country.

When we were in the Bluegrass State last month for the Bourbon Classic, we were able to fit in a bit of shopping.  Now, those expecting to run into those more well known unicorns – Pappy, BTAC, Four Roses Limited Edition, etc – will find themselves every bit as frustrated as they might in their own state.  But some good knowledge of stores and a bit of luck mixed with a willingness to search, and you can certainly find some unique bottles.

It was with that mind set that Jen and I stumbled across a unique variation on a brand I had reviewed in February.  Then, I tried the Buffalo-Trace produced, Virginia aged John J. Bowman single barrel for the first time, and found it enjoyable.  This time, we found a bottle of a Abraham Bowman limited release, aged in Vanilla beans.  It certainly seemed unique enough, so we brought the last bottle on the shelf home to try for ourselves.

The Bowman distillery in Virginia has been putting out Limited Edition efforts for a few years now – past releases included a port-wine finish and a double barreled.  This year, they released a vanilla bean infused version.  The distillery explains this as quite a process – they “chopped up Madagascar vanilla beans in October, 2012″ that then “were added at various levels and tasted every ten weeks to observe how their flavor interacted with the bourbon as it aged. After a little over two years, all of the barrels were married together.”

What resulted was less a”flavored” bourbon and more of an interesting, enhanced version of their whiskey. Luckily for us, although the release was originally only supposed to be available in the Bowman home state of Virginia, we found a bottle in Kentucky, so a few got out.

Was it any good?  Jen and I gave it a shot (pun fully intended).

Dan: The nose is certainly vanilla-infused, but not nearly as much as i expected.  There are serious rye notes here, as well as a nuttiness akin to walnut and pecan, and a soft oak smokiness.  That’s not to say there isn’t an abundance of vanilla – it’s definitely there – but it does downplay some of the other sweeter notes I would expect.  There’s no sweetness aside from the vanilla at all.  But I think it’s well balanced.

Jen: The nose is a bit too Bath and Body works for me. And I don’t have to sit around with my nose in a glass, so who cares if it smells like there should be coordinating lotions?

Dan: The taste is surprising.  I don’t get a flood of vanilla – this is no ‘flavored’ whiskey.  Cinnamon and spice, orange, with more of that nuttiness in there, along with a touch of bitterness I am going to assign to the vanilla bean.  Madagascar vanilla beans are known for being rich and creamy, and while the mouth feel here is thicker than the average whiskey, I wouldn’t call it creamy or buttery.  It has a flatness to it – exceptionally smooth, but not particularly sweet.

Jen: But the taste was very nice. I think the vanilla flattens the complexity of the whiskey giving it a simpler taste, much like a flavored whiskey. However, unlike other cherry or honey whiskeys, the vanilla is integrated very naturally and very skillfully into the rest of the flavor profile. So you avoid feeling like a sorority girl while you drink it. It’s a very pleasant drink, and very tasty.

Dan: Good call.  It is a bit flat, and very smooth, and has a medium finish that is ALL vanilla.  It’s hard to prescribe who this is for, other than the adventurous bourbon enthusiast.  It’s not complex enough for the aficionado, not soft enough for the flavored whiskey fan.  I bet it would make an awesome mixed drink. But at $70 and up a bottle, that’s a pricey mixer.

We both like it, and it’s fun and different.  A nice addition to the collection, but if it makes more than it’s current limited edition run, I probably wouldn’t seek it out again.

One thought on “Dan’s (not quite) Bourbon of the Week: Abraham Bowman Limited Edition Vanilla Bean Infused Whiskey”